Toronto Condos In The News

The past week has seen lots of media attention to Toronto’s housing market on topics ranging from fake proposals, low inventory and foreign home buyers. Let’s take a look at some of the highlights:

There’s no question that Toronto has been erecting high-rise condos at astonishing rates, with condo proposal plaques visible on many street corners all over the city. One prankster wanted to put city planners to the test by making up outlandish proposals, such as the addition of 40 stories to the CN Tower, or a 50-story residential tower right smack in the middle of city hall. The proposals themselves were fairly convincing and managed to convince quite a few residents. We got a good laugh out of it! 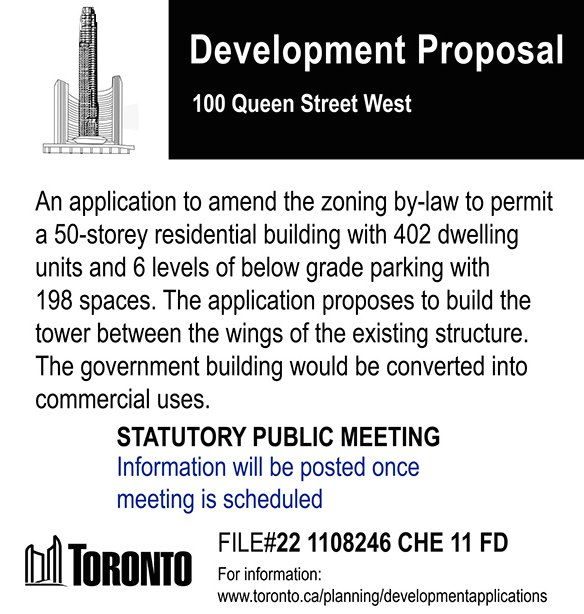 The notion of Toronto’s condo inventory being snagged by foreign investors has been prevalent for quite some time. In response to similar concerns in Vancouver, the B.C. government introduced a 15% tax on home purchases by foreign investors. In order to investigate the basis of fears surrounding foreign buyers driving up real estate values, CMHC conducted a study early this year and found only 3.3 per cent of Toronto condos are owned by foreigners, with  3.5% in Vancouver.

According to Urbanation, local Toronto investors outnumber foreign buyers 10-1, and make up 57% of the condo sales. Only 43% of condo purchases were for owner-occupied locals. Resale values for new condos have been growing at a more modest rate than single-family dwellings, so investors hold on to them and rent them out (filling the inventory void in the Toronto rental market).

Developers are banging up condos as fast as they can, but Toronto buyers are scrambling to snap them up even faster. With detached home price averages skyrocketing 20.5% in just one year to $1,202,753, buyers are looking to high-rises for affordable housing. Growth in condo prices has been modest in comparison, with a 10% increase from last year to $498/sqft. According to Urbanation, there is only a 6.8 month supply of condo inventory; 7731 units were sold between April and July alone. The lack of inventory is a fallout from 2015, where there was a 9% drop in new development projects.